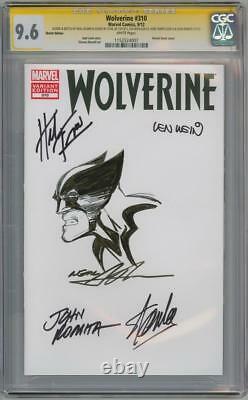 WOLVERINE #310 CGC SIGNATURE SERIES SIGNED x5 STAN LEE ROMITA NEAL ADAMS SKETCH. Wolverine #310 Blank Sketch Variant CGC 9.6 Signature Series comic book, from Marvel Comics, which has been signed by the following: 1 Stan Lee - the Marvel Comics legend and creator of the X-Men back in 1963! 2 Neal Adams - fan favourite X-Men, Avengers and Batman artist from the 1970s who sketched and inked a large piece of original artwork of Wolverine onto the blank cover. Adams charges hundreds of dollars for a cover sketch at conventions.

3 John Romita - vintage Silver Age Marvel artist and art director who designed Wolverine's costume and clawed look for Roy Thomas, then Marvel Editor In Chief. 4 Len Wein - the late writer who introduced Wolverine in Incredible Hulk #180 and #181. 5 Herb Trimpe - the late artist who was the first to drawn Wolverine in Incredible Hulk #180 and #181. An extremely rare opportunity to get a piece of Wolverine history with 5 authenticated creator signatures and detailed original artwork from an comic industry legend!!

It has been professionally graded by CGC, the largest independent comic grading company in the world, and slabbed in a sealed tamper proof protective case. The comic grade is guaranteed to be investment grade 9.6 (NEAR MINT+) and this is a yellow label CGC signature series, which means that an authorised CGC representative witnessed the signings and sketching and this also acts as a Certificate Of Authenticity.

You can check the validity of this item and the signatures and sketch by entering the 10 digit code on the yellow label at the CGC comics web-site. There are no cracks on the case. We are also the largest dealer of CGC and Dynamic Forces signed comics outside of the US, with an extensive inventory of over 1,000 different issues!

Items are sent securely in strong packaging. For low quantities this is a stiff oversized corrugated cardboard comic mailer. For larger quantities of comics and higher value items we use bubble wrap & poly chips in boxes. CGC slabs are sent in multiple layers of protection in strong boxes. We have over a decade's experience in comics & collectibles. To help you spot fakes. The item "WOLVERINE #310 CGC SIGNATURE SERIES SIGNED x5 STAN LEE ROMITA NEAL ADAMS SKETCH" is in sale since Sunday, December 23, 2018. This item is in the category "Books, Comics & Magazines\Comic Books & Memorabilia\American Comics\Comics & Graphic Novels". The seller is "heroes-assemble-comics" and is located in Christchurch. This item can be shipped worldwide.