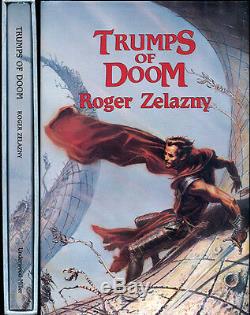 Trumps of Doom by Roger Zelazny Hardcover First Edition - Signed Limited Underwood-Miller 1985 #338/500 copies. Fine in Fine Dustjacket in Fine- Suede Slipcase. The first book of the Second Chronicles of Amber series, the sequel to the first chronicle beginning with Nine Princes in Amber. Like the first Chronicles, the second comprises five books, although Underwood-Miller appears to have completed only these two.

NOTE on FEEDBACK: If you have problem with an order for any reason, please contact me before leaving feedback! 99% of the time we can resolve the problem. It is much more difficult to change feedback once left. A Word on First Editions : 95% of my offerings are trade editions, and 90% of those are first printings. In general I do NOT sell bookclub editions or cheap reprints like Modern Library except in rare instances which would be explicitly stated as such. In general, I also DO NOT sell x-library copies. If the book is both a first edition AND a first printing , it will be marked as first edition in the Item Specifics under. Otherwise assume a later printing or a later edition. They typically take 1 1/2 to 3 weeks. It is best to find out your country's policies in this regard. I try my very best to accurately describe condition. The item "Trumps of Doom (Amber Chronicles) by Roger Zelazny HC 1st/1st Signed Limited" is in sale since Sunday, September 2, 2012. This item is in the category "Books\Fiction & Literature". The seller is "tristanbooks" and is located in Oakland, California. This item can be shipped worldwide.