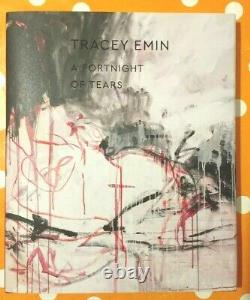 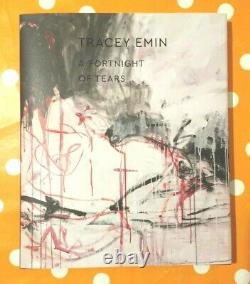 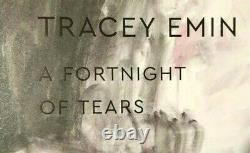 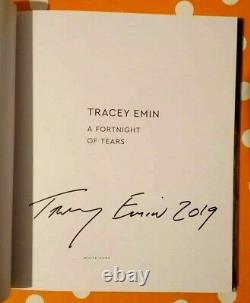 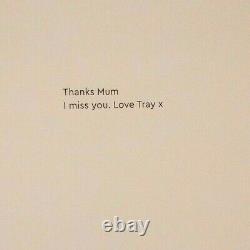 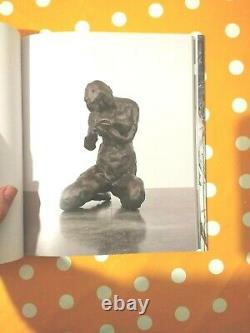 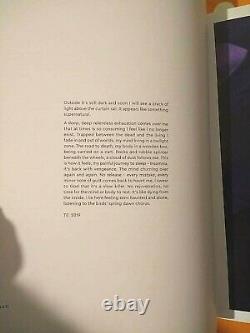 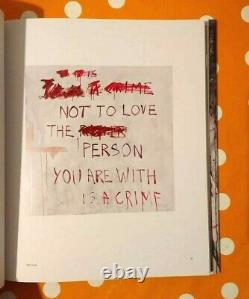 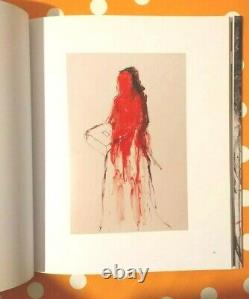 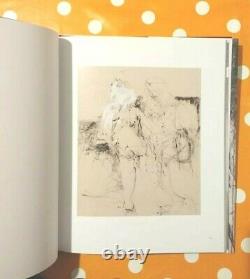 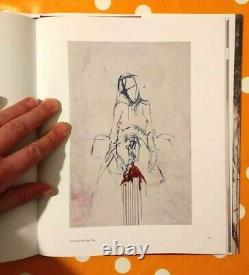 A Fortnight of Tears - Exhibition Catalogue. Hand signed and dated 2019. Personally collected at the White Cube Gallery, Bermondsey, London on 2 April, 2019. An exclusive book signing event for those lucky enough to book a place on the one night only event. A great exhibition of sculpture, painting, photography, video, and drawing. A real creative personal expression of grief, and memory for Tracey's mum, encapsulated in many unique pieces, and captured beautifully in this wonderful art catalogue. Title: Tracey Emin: A Fortnight of Tears. 6 February 2019 7 April 2019.

White Cube Bermondsey is pleased to present A Fortnight of Tears by Tracey Emin. Installed throughout the gallerys spaces, this major exhibition includes sculpture, neon, painting, film, photography and drawing, all focusing on the artists own memories and emotions arising from loss, pathos, anger and love. On entering South Gallery I, the viewer is confronted by fifty double-hung self portraits from an on-going series taken at different moments and states during the artists periods of insomnia. These unsettling and intimate close-ups, blown up in size and overwhelming in number, capture the habitual torment and desperation of these lonely wakeful hours.

In her new paintings shown throughout the exhibition, Emin articulates the joy and suffering that is intrinsic to human existence, from the often fraught territory of sexual relationships, to the physical trauma of abortion, and the recent passing of her mother. There is an uninhibited energy to these new works, as she powerfully inscribes emotional turmoil through a freer yet assertive form of gestural figuration. Focusing on her own body as a conduit for her feelings, she connects with a history of expressive figuration in art, from the moving realism of Käthe Kollwitz to the modernist angst of Edvard Munch or the heightened sexuality of Egon Schieles female subjects. Emin employs a palette of visceral pink and dark red tones in many of the works, creating a heightened physicality that alludes to the degenerative journey between birth and death.

Drips and bleeding paint point to the fluidity of the body and figures are ghostly, bereft of any recognisable details of context or place. In I watched you disappear. Pink Ghost (2018), for example, a spectral presence appears to be dissolving, insubstantial and elusive. Several other highly gestural figures, such as But you never wanted me (2018), or It was all too Much (2018), convey feelings of love and desire, while others bluntly depict the acts of sexual aggression that continue to haunt the artist.

A Fortnight of Tears centres around Emins own pain, including her mothers death, with works shown in The Ashes Room evoking states of bereavement, mourning and enduring love. Set against the melancholic grey tone of the walls, I Could Feel You (2018), Bye Bye Mum (2018), I Prayed (2017) and Can you hear me (2017) all depict grief with absolute candour. In I was too young to be carrying your Ashes (201718) the sheer sorrow contained in the figure clutching a box is conveyed through broad brushstrokes that turn from vivid red to black. In a new film screened alongside these paintings, the camera pans slowly across a table towards a wooden box placed at one end, bathed in an ethereal light.

Emin recalls the overwhelming weight of her mothers ashes as she carried them back to her home: I carried her ashes across the street trying not to cry, trying not to think. It somehow felt wrong like I was stealing something like I was a thief. The celebration of motherhood and the female form reappears in The Mother (2017) installed in the 9 × 9 × 9 gallery.

This bronze sculpture relates to Emins public commission for Oslos Museum Island, which will be permanently installed beside the Edvard Munch Museum from late spring 2020. A kneeling nude, gazing intently upon an absent form cradled in her palms, she is a profound symbol of femininity and refuge. Two further sculptures portray a female figure lying face down or curled up in vulnerable and eroticised poses, with delicately modelled limbs elongated, hands clenched by her head or between her legs.

As Jonathan Jones writes: [Emins] sculptures of women in states of rapture and longing are open and unconcealed confessions of fantasy, desire, passion. They are visions of the earth-shaking love she still believes in. Exhibited alongside the paintings, film and drawings are four vitrines containing intimate works on paper, maquettes and memorabilia curated from the artists archive, which are organised thematically, based on the subjects of love, sex, death and fear. The endnote to the exhibition is How It Feels (1996), a pivotal early film in Emins career.

Here the artist, seen walking through the streets of London, recounts the ordeal of her first abortion in 1990 and how through that crisis she came to the revelation that art could not be made for arts sake it had to be intrinsically bound up with her own life. As she described it: the essence of creativity, that moment of conception the whole being of everything... It had to be about where it was really coming from. Please look at my other items including rare modern and contemporary art and design pieces. The item "Tracey Emin A Fortnight Of Tears (2019) Hand Signed Book RARE" is in sale since Thursday, May 30, 2019.

This item is in the category "Books, Comics & Magazines\Non-Fiction". The seller is "ashbinx74" and is located in Bruton. This item can be shipped worldwide.