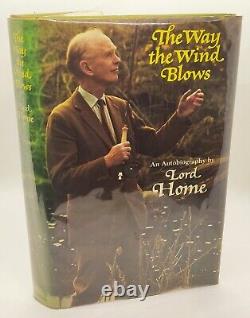 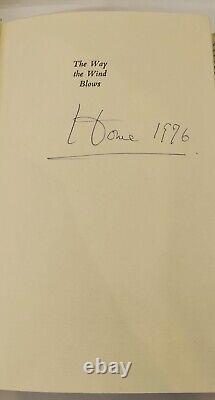 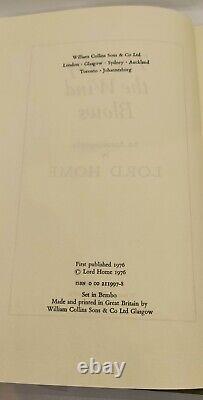 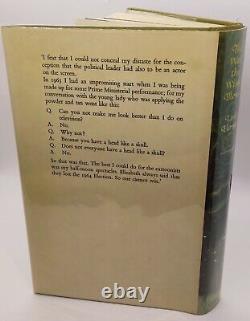 Bexhill Books Limited specialises in rare, collectible first editions of modern literature and non-fiction, primarily from the 20th century. All our books are handled with the utmost care and are described as accurately as possible.

All book dust-jackets, where applicable, are protected in archival-quality cellophane, and are kept out of sunlight. The Way the Wind Blows. A very good First Edition, First Impression copy of Prime Minister Alec Douglas-Home's autobiography from 1976.

DJ in very good condition, some shelf wear and a little loose on the flaps, clipped, minor tanning, but colours generally vivid and bright. Pages clean and tight, minor foxing here and there.

Signed by Home to title page along with date of 1976, when the book was published. Alexander Frederick Douglas-Home, Baron Home of the Hirsel KT PC; (2 July 1903 - 9 October 1995) was a British Conservative politician who served as Prime Minister from October 1963 to October 1964.

He is notable for being the last Prime Minister to hold office while being a member of the House of Lords, before renouncing his peerage and taking up a seat in the House of Commons for the remainder of his premiership. His reputation, however, rests more on his two spells as the UK's foreign secretary than on his brief premiership. Within six years of first entering the House of Commons in 1931, Douglas-Home (then called by the courtesy title Lord Dunglass) became parliamentary aide to Neville Chamberlain, witnessing at first hand Chamberlain's efforts as Prime Minister to preserve peace through appeasement in the two years before the outbreak of the Second World War. In 1940 Dunglass was diagnosed with spinal tuberculosis and was immobilised for two years. By the later stages of the war he had recovered enough to resume his political career, but lost his seat in the general election of 1945.

He regained it in 1950, but the following year he left the Commons when, on the death of his father, he inherited the earldom of Home and thereby became a member of the House of Lords. Under the premierships of Winston Churchill, Anthony Eden and Harold Macmillan he was appointed to a series of increasingly senior posts, including Leader of the House of Lords and Foreign Secretary. In the latter post, which he held from 1960 to 1963, he supported United States resolve in the Cuban Missile Crisis and was the United Kingdom's signatory of the Partial Nuclear Test Ban Treaty in August 1963. In October 1963 Macmillan was taken ill and resigned as Prime Minister. Home was chosen to succeed him.

By the 1960s it was generally considered unacceptable for a Prime Minister to sit in the House of Lords, and Home renounced his earldom and successfully stood for election to the House of Commons. The manner of his appointment was controversial, and two of Macmillan's cabinet ministers refused to take office under him. He was criticised by the Labour Party as an aristocrat, out of touch with the problems of ordinary families, and he came over stiffly in television interviews, by contrast with the Labour leader, Harold Wilson. The Conservative Party, in office since 1951, had lost standing as a result of the Profumo affair, a sexual scandal involving a defence minister in 1963, and at the time of Home's appointment as Prime Minister seemed headed for heavy electoral defeat. Home's premiership was the second briefest of the twentieth century, lasting two days short of a year.

Among the legislation passed under his government was the abolition of resale price maintenance, bringing costs down for the consumer against the interests of producers of food and other commodities. After narrow defeat in the general election of 1964 Douglas-Home resigned the leadership of his party, having instituted a new and less secretive method of electing the party leader. From 1970 to 1974 he served in the cabinet of Edward Heath as Secretary of State at the Foreign and Commonwealth Office, an expanded version of the post of Foreign Secretary, which he had held earlier. As new means that the book is in the state that it should have been in when it left the publisher. Fine (F or FN) is "as new" but allowing for the normal effects of time on an unused book that has been protected. A fine book shows no damage. Very good (VG) describes a book that is worn but untorn. For many collectors this is the minimum acceptable condition for all but the rarest items. Any defects must be noted. Good (G) describes the condition of an average used worn book that is complete. Fair shows wear and tear but all the text pages and illustrations or maps are present.

It may lack endpapers, half-title, and even the title page. All defects must be noted. If the damage renders the text illegible then the book is not even.

Ex-library copies must always be designated as such. No matter what the condition of the book. Book club copies must always be designated as such. Binding copy describes a book in which the pages or leaves are perfect, but the binding is very bad, loose, off, or non-existent. All our books are securely packaged using the most appropriate materials to ensure that your book arrives safely.

We bubble-wrap all our books, and use acid-free tissue paper, along with other shredded-paper fillers; all housed in safe and secure cardboard boxes. All books (or dustjackets of books) are wrapped in oil-free cellophane and handled carefully throughout the packaging and dispatch process. We welcome direct contact from our customers, and we are more than happy to send more pictures or videos of the items we have listed. We also welcome contact from customers who want to know more about us, or who are looking for a particular book where we may be able to help you find it. This item is in the category "Books, Comics & Magazines\Antiquarian & Collectable".

The seller is "bexhill_books" and is located in this country: GB. This item can be shipped worldwide.