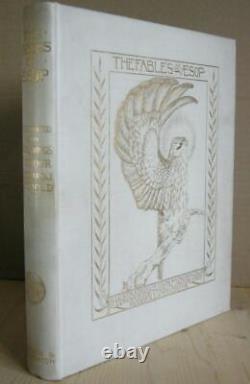 The Fables of Aesop Illustrated & Signed by Edward J. London: Hodder & Stoughton, 1909, h. Imited to seven hundred and fifty copies, numbered and signed by the artist, of which this is number 303. Twenty-five tipped-in colour plates all present as called for, regarded as some of Detmold's finest work.

The twenty-five fables are: The Vain Jackdaw; The Ants and The Grasshopper; The Eagle and The Arrow; The Oxen and The Axle Trees; The Town Mouse and The Country Mouse. The She-Goats and Their Beards. The Mountain in Labour; The Monkeys and Their Mother; The Monkey and The Fishermen; The Hart and The Vine; The Lion and The Three Bulls; The Goat and The Ass; The Birds, The Beasts, and The Bat; The Hare and The Tortoise; The Geese and The Cranes; The Eagle and His Captor. The Wasp and The Snake; The Grasshopper and The Owl; The Fox and The Crane; The Monkey and the Dolphin; The Eagle and The Beetle; The Pomegranate, The Apple-Tree, and The Bramble; The Owl and The Birds; The Lark Burying Her Father; The Wolf and The Goat.

Bound in publisher's original white buckram with the upper cover decorated with a gilt pictorial design, rear cover with a scratch near the bottom, front cover very good, perhaps slightly darkened down the spine. Top-edge gilt, bottom-edge generally clean, fore-edge rough-cut and foxed. Internally hinges strong, binding tight, a coat of arms inside the front cover that may be from Rugby School (Orando Laborando), some pencilled numbers & letters to first blank page, end-papers foxed, contents thereafter in very good condition with little or no foxing, all 25 colour prints present and in fine condition. Despatched via Parcelforce to most of the UK mainland. Potential buyers from those areas should contact me for a quote.

Attention Sellers - Get Templates Image Hosting, Scheduling at Auctiva. This item is in the category "Books, Comics & Magazines\Antiquarian & Collectable".