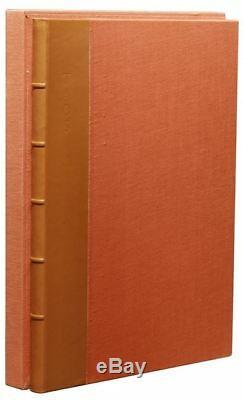 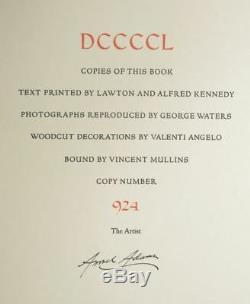 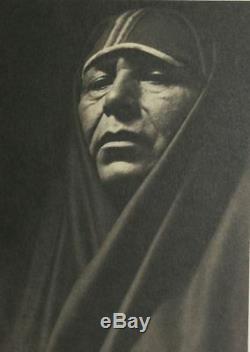 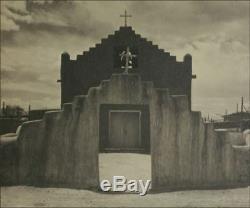 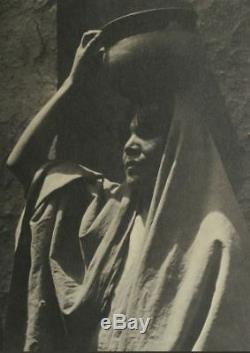 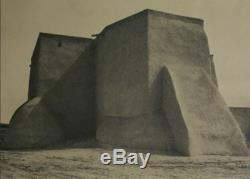 Measuring approximately 18" x 13", the book is a tall folio bound in original half tan calf with orange cloth boards, marbled endpapers, with the original matching slipcase. A total of 950 copies were signed and numbered by Ansel Adams with this being number 924. Tiny scrape to spine; a FINE copy.

This is a signed, limited edition of "Taos Pueblo" published by the New York Graphic Society, Boston in 1977. Originally published in 1930, "Taos Pueblo" was Ansel Adam's first book and launched his career as arguably the greatest landscape photographer of our time. Featuring 12 gravure reproductions of Adams's photographs as well as woodcut motifs by Valenti Angelo, this limited edition is a faithful reproduction of the original landmark book.

With Taos Pueblo we see a commitment to light and form as the essential building blocks of a picture. Every exposure was made in the most brilliant sunshine which in turn created deep shadows.

Sunlight and shadow are at the same time the photographer's friend and foe. Neither films nor papers can record the two extremes of bright sun and deep shadow equally well, and an unhappy tonal compromise is often the result. Rich shadow detail is here realized simultaneously with delicate highlights in a way that proves Adamss native sense for the toughest technical problems of the medium, and how to solve them. Naef, The Metropolitan Museum Art.

Cited in both "The Book of 101 Books: Seminal Photographic Books of the Twentieth Century" and "The Open Book", "Taos Pueblo" is a landmark photobook and is considered by many to be the greatest pictorial representation of the American West. Who we are - D&D Galleries was founded in 1985. We are members of the Antiquarian Booksellers Association of America (ABAA), the International League of Antiquarian Booksellers (ILAB), and the Provincial Bookfair Association of Great Britain (PBFA). Our inventory (largely English language only) is slightly eclectic and ranges from the 16th through the 20th centuries with sub-specialties in S.

And Wing books, Lewis Carroll, Charles Dickens, presentation and association material as well as 17th and 18th C. British history, sets and bindings. The item "Taos Pueblo by Ansel Adams, Signed Limited Edition 1977" is in sale since Wednesday, March 28, 2018. This item is in the category "Books\Antiquarian & Collectible".

The seller is "dnd-galleries" and is located in Somerville, New Jersey. This item can be shipped worldwide.