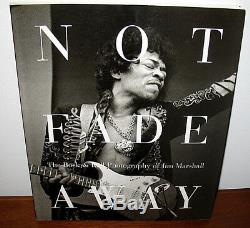 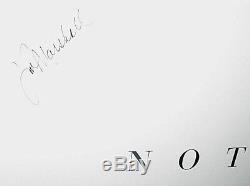 The Rock & Roll Photography of Jim Marshall. SIGNED by Jim Marshall on the half title page. With 124 black and white photos from the Jim. Archives including Joan Baez, Jimi Hendrix, Muddy Waters, The Doors, Bob Dylan, Janis Joplin, The Beatles, The Rolling Stones, and many others.

With an essay by Jon Bowermaster. Jim Marshall is the ultimate rock & roll photographer, a man who began shooting during San Franciscos acid rock heyday and never stopped; a man Annie Leibovitz once called the rock and roll photographer.

His outsized personality and penchant for fast living have given him a special rapport with musicians and enabled him to get candid, revealing shots. Not Fade Away collects the best of Marshalls photography for the first time and gives us a memorable visual history of the rock & roll era that is unprecedented in its intimacy, immediacy, and impact. Jim Marshall has worked most of his career in the music business doing magazine and editorial work, publicity, documentary, photography, and album/CD covers. He was one of the chief photographers at the Monterrey Pop Festival and at the original Woodstock, the only photographer granted backstage access at the Beatles' last concert, and the only person ever to squeeze Janis Joplin and Grace Slick into a single frame. Marshall has more than five hundred album and CD covers to his credit.

His work has been published worldwide and is included in the permanent collection at the Smithsonian. He is the author of Not Fade Away: The Rock and Roll Photography of Jim Marshall. Very light wear to the covers. Few scratches visible in the light.

The item "SIGNED Jim Marshall Not Fade Away Rock & Roll Photography of The Beatles Doors" is in sale since Friday, May 25, 2012. This item is in the category "Books\Antiquarian & Collectible". The seller is "hmxa15a" and is located in Island Park, New York.