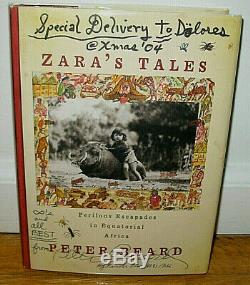 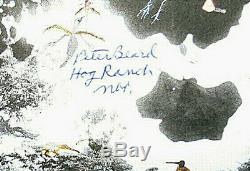 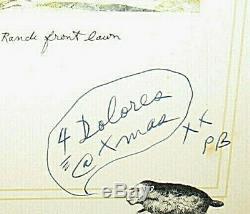 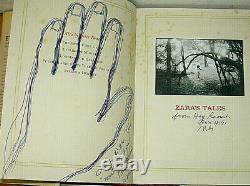 Very good plus in a very good dust jacket. From adventurer, explorer, photographer, writer, pied piper Peter Beardeleven irresistible tales, told to his daughter in his tented encampment at Hog Ranch, Kenya, about life, about living, about Africa. He writes of the East African hills he came to know so well over four decades, where time slows to infinity in a great bottomless, bottle green underwater world. About Nairobi in the 1950s, still a quaint, eccentric pioneer town, full of characters of all stripes and tribes, where rhinoceros roamed the streets and local residents went to the movies in pajamas. He writes of the camp he built twelve miles outside of Nairobi so that he would never be off safari, a forty-acre patch of bush called Hog Ranch (abutting Karen Blixens plantation), named for the families of warthogs who wandered into camp, a camp populated with waterbuck, suni, dik-diks, leopard, giraffe, and occasionally lion and buffalo.

In Big Pig at Hog Ranch, Beard tells the story of Thaka (translation from the Kikuyu: handsome stud), Hog Ranchs number-one, fearsome, 300-pound warthog, who came into camp and dropped to the ground happy for a vigorous tummy rub, and who one night, lying in his favorite position, munching on corn and barbeque chicken, was encroached upon by a bristly haired, wild-looking boar hog. All three hundred pounds of Thaka exploded straight at the hairy intruder, the two brutish, bony heads crashing together thundering through the camp and Peter witnessed the unleashed powerthe bullish strengthof the wild pig. In Roping Rhino, Beard tells of his first job in Africa, rounding up and relocating rhinos for the Kenya Game Department with his cohort and neighbor, a weather-beaten native of Old Kenya who thrived on danger and refused to batheand of the enormous silver-backed rhino bull that became their Moby Dick.

He writes of his quest to photograph overpopulated and habitat-destroying elephants for Life magazine on the eve of Kenyas independence. Of his close encounter with the legendary man-eating lions of Starvo (descendants of the famed beasts rumored to be immune to bullets, who in the late nineteenth century halted the construction of the Mombasa railroad, devouring railroad workers and snatching sleeping passengers from their Pullman berths in the dead of night to make a meal of them), who charged the author, coming in slow motion, like a bullet train erupting out of a tunnel, soundless, like an ancient force. He tells of his round-the-clock adventure tracking and studying crocodiles with a game wardenbiologist at Lake Rudolf, a tale that begins with one crewmember being grabbed from behind by a ten-foot crocodile and another doing battle with an almost prehistoric monster fisha 200-pound Great Nile perch! And he writes of the final wildlife encounter that ended his safari days, an incident that proved Karen Blixens motto: Be bold, be bold. Zaras Tales confirms to our constant surprise and delight that nothing out of the ordinary happens.

The dust jacket has light wear. Little rubbing to the head and heel of the spine. Signed, inscribed and dated by Peter Beard on the dust jacket cover with embellishments.

A Hog Ranch notation on page four. Peter Beards New York City address under his name on the title page. This is an exceptional unique copy, personally signed four times and embellished by the late great Peter Beard. The item "SIGNED 4X Peter Beard Hand Print Zaras Zara's Tales Perilous Escapades Africa" is in sale since Wednesday, April 22, 2020. This item is in the category "Books\Antiquarian & Collectible". The seller is "hmxa15a" and is located in Island Park, New York. This item can be shipped worldwide.