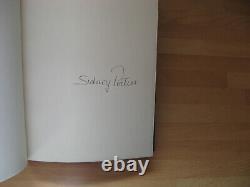 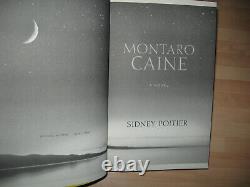 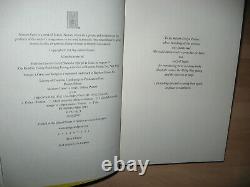 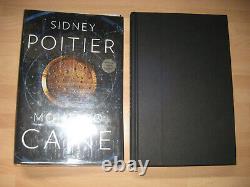 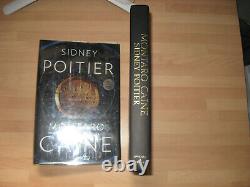 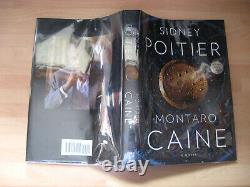 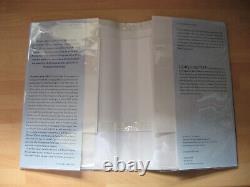 A rare signed 1st edition/1st printing of the only novel from Sir Sidney Poitier (1927 - 6 January 2022), the great Bahamian-American actor, director, author and diplomat. The first black actor to win a lead role Academy Award (in 1963 for'Lilies of the Field') he starred in subsequent great films such as'To Sir With Love','In The Heat Of The Night' and'Guess Who's Coming To Dinner'. Tributes suggest he was as fine a gentleman as he was an actor.

Light storage wear to head of spine, foot of spine and lower gutter ends sees heavier storage pushing, resultant crinkling to dustjacket at this point. Roundel sticker to front panel of the dustjacket.

Dustjacket is housed in a removable protective plastic sleeve. A baby is born with a coin in her hand.

An orphan crafts a mysterious wooden object. The CEO of a large corporation finds himself under extraordinary pressure at work and at home.

And on a remote hilltop on a Caribbean island, a medicine man seems to understand the meaning of all these events and to hold the key to the future. Montaro Caine, CEO of the Fitzer Corporation, is losing control of the company he built just as his teenage daughter is experiencing her own difficulties. At this moment of crisis, a man and woman appear at his office with a coin of unknown provenance, composed of a metal unknown on Earth.

The coin's appearance draws the attention of scientists, collectors, financiers, and thieves, all of whom vie to get their hands on it, and Montaro himself hopes that the discovery of the coin will save his company. But the value of the coin lies not in its monetary worth but in its hold on the people who come into contact with it. These include the young woman who is not aware of the object that was found in her hand at birth; an old man who, as a boy, crafted a wooden compact as a gift for a young Montaro Caine; and the elusive healer Matthew Perch, who, from his hut on a small Caribbean island, knows precisely why these people have been brought together and what wisdom the coin imparts. Beloved actor and director Sidney Poitier takes us on a wild and unexpected adventure-from New York to Europe to the Caribbean and beyond-and offers a heartfelt message about the potential each of us has within ourselves, and about being open to the possibility that there are mysteries in the universe, and here on Earth, far greater than we can imagine. An enthralling journey into the magic of existence, Montaro Caine is a radiant debut from an American legend.

Multiple items - Please review my other listings to see if there are any other items which are of interest to you. I will be regularly listing items for sale, please save me as one of your favourite sellers for the future, thanks. This item is in the category "Books, Comics & Magazines\Antiquarian & Collectable". The seller is "markr9884" and is located in this country: GB. This item can be shipped to United Kingdom.