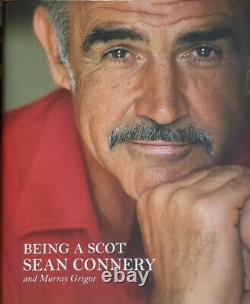 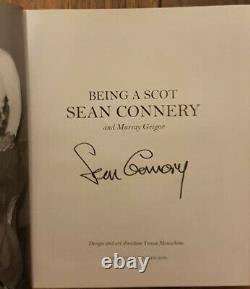 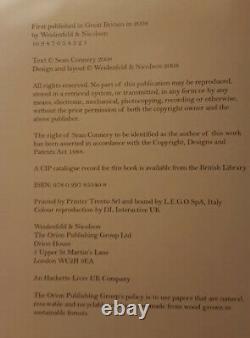 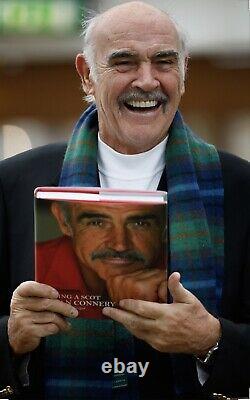 Signed First Edition of BEING A SCOT by Sean Connery and Murray Grigor, hardback edition. Not signed bookplate - ACTUALLY SIGNED! Excellent condition and featuring the extremely sought after autograph of Sir Sean Connery. This book is stupidly rare! It was signed in 2008 when Connery was promoting the release of the book in Edinburgh. The item comes with a letter from the manager of Waterstones, Edinburgh who organised with the publishers for Connery to visit the store, unannounced and sign their very limited stock. Very rare item and will only increase in value. With signed letter from Waterstones manager detailing the signing! Description My first big break came when I was five years old. It's taken me more than seventy years to realise that. You see, at five I first learnt to read. It's that simple and it's that profound. I left school at thirteen. I didn't have a formal education... It has been a long return journey from my two-room Fountainbridge home in the smoky industrial end of Edinburgh opposite the McCowans' toffee factory. There was no bathroom with a communal toilet outside. For years we had only gas lighting. Sometimes the light in the shared stairway would be out after some desperado had broken the mantle to bubble gas through milk for kicks. Although he is an indubitably international superstar, Sir Sean Connery still knows the city of Edinburgh practically street by street from delivering the morning milk as a schoolboy. His round included Fettes College, where Ian Fleming had sent his fictional James Bond after he was expelled from Eton. Being a Scot' is a vivid and highly personal portrait of Scotland and its achievements, which is self-revelatory whilst full of Sir Sean's desire to shine light upon Scottish success and heroic failure. His personal quest with his friend and co-writer Murray Grigor has been to seek answers to some perplexing questions. How did Scots come to devise so many new sports and games, or raise others to new heights? What gave fire to the Gothic tendency in Scottish literature? Why have so many creatively inventive and influential architects been Scots? Where did Scotland's unreal blend of psychotic humour originate?

And what about the national tradition of self-deprecation sometimes called the Scottish cringe? Sean Connery offers a correction to misconceptions that many believe are part of the historical record whilst revealing as never before his own vibrant personal history. The item "SEAN CONNERY signed BEING A SCOT autograph book 1st Edition JAMES BOND hardcover" is in sale since Tuesday, November 3, 2020. This item is in the category "Books, Comics & Magazines\Non-Fiction".

The seller is "scrooge-123" and is located in London. This item can be shipped worldwide.