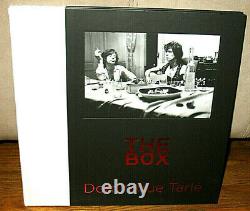 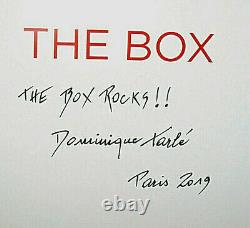 Numbered edition of 1000 copies. SIGNED in black marker on the title page. No dust jacket as issued.

52 mostly black and white reproductions. A few are in color. There are two small dings to the top edge of the boards. Dominique Tarle is an acclaimed French photographer best known for his association with The Rolling Stones.

It became the location where Exile On Main Street was recorded, with the help of a mobile recording truck connected to a basement studio. Tarle recounted to the New York Times that, A carnival of characters paraded through: Terry Southern, Gram Parsons, John Lennon, even a tribal band from Bengal dope dealers from Marseille; petty thieves, who stole most of the drugs and half the furniture; and hangers-on, all of them there to witness what was happening. Tarles beautifully evocative photographs from Nellcote are renowned among Stones fans the world over. Tarle said, I realized that pictures are far more important than the photographers themselves.

For myself, I could only say that the whole of the game was to remain invisible and to have the least possible impact on what was going on around me. New unread copy with two small dings to the top edge of the boards. The item "New SIGNED Numbered Limited The Box Dominique Tarle Rolling Stones Photographs" is in sale since Friday, November 22, 2019. This item is in the category "Books\Antiquarian & Collectible".