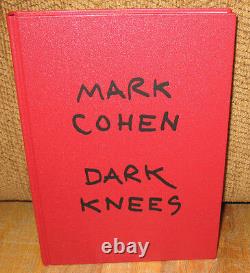 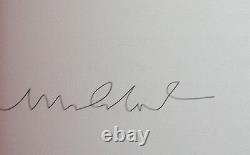 A figure of the street photography genre which dominated American photography in the early 1970s, he is also the inventor of a distinctive photographic language, marked by a fleeting arrangement of lines and, at the same time, an instinctive grasp of the organic, sculptural quality of forms. Two photographs hang opposite each other in his studio: one from Henri Cartier-Bresson's surrealist period and another by Aaron Siskind.

The elegant geometry of one and the dry plenitude of the other transpire in the work of Mark Cohen, which John Szarkowski showed at the MoMA as of 1973. Over the past 40 years Mark Cohen has walked the length and breadth of the streets in and around his hometown, seizing - or rather extracting - fragments of gestures, postures and bodies. In his photos we see headless torsos, smiling children, willing subjects yet still frighteningly vulnerable, thinly sketched limbs and coats worn like protective cloaks. Thus Mark Cohen slices and sculpts the very thick of the world to impose, in successive touches, a Kafkaesque vision, ruthless and poetic, of an environment that encompasses him. This remarkable body of work - Cohen rarely uses the viewfinder, holding the camera at arm's length - is rooted in impulsions that last just fractions of a second. A disconcerting strangeness emanates from his subjects, some caught in the dazzle of the flash. Bodies seem uncomfortable, threatened, lost, grinning too wildly or reduced to their erotic dimension. Ordinary objects appear isolated, mysterious, sinister. The decline of this small mining town is right there, in its yards, at its bus stops, on its porches, but Mark Cohen's intentions are anything but documentary. Repetitive to the verge of obsession, he has no idea what brought him there or what he hopes to find. Rather he is driven by the beauty of a chance encounter, by the torments or delights he detects in another's substance. There is, in the brutality of his gaze, a rawness and a nervous energy, an ambivalence and a grace through which the making of a photo becomes the expression of a revelation. If you treat yourself to just one photobook this season, this is my personal recommendation. The item "New SIGNED Mark Cohen Dark Knees Monograph Street Photography HC" is in sale since Friday, June 20, 2014. This item is in the category "Books\Antiquarian & Collectible". The seller is "hmxa15a" and is located in Island Park, New York. This item can be shipped worldwide.