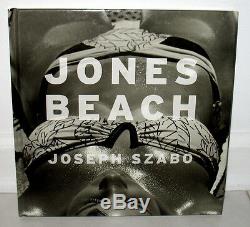 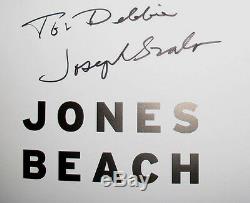 SIGNED on the title page. No dust jacket as issued. Introduction by Vince Aletti editor.

Beginning in the early 1970s, Joseph Szabo started capturing the melting pot of humanity on. One of the busiest strips of sand and ocean in the world with more than six million visitors a year.

Among the sea of bodies, Szabos camera reveals moments of both quiet introspection and unashamed exuberance. Images of tanned muscle men, catwalk-like displays of beach wear, heavily oiled skin, masses of sprayed hair, and shy adolescents all reveal the dynamics of the beach so close to. Class, race, and other potential divisions are temporarily forgotten, and the perfect and the flawed are portrayed with the same respect and tenderness. Szabo is an internationally acclaimed artist whose last two books (Teenage, Almost Grown) have influenced and been admired by a whole generation of photographers and created a cult-like following in the worlds of fashion, advertising, and photography. This crowd, along with fans of. And people interested in beach culture in general will treasure this funny, sexy, lovely volume created over 35 years. Joseph Szabo taught photography at a. NY high school from 1972 to 1999, as well as at the International Center of Photography in.

For more than twenty years. His work resides in many permanent collections including the. Metropolitan Museum of Art, ICP, the Bibliotheque National in. The item "New SIGNED Joseph Joe Szabo Jones Beach New York Ocean Sand Teenagers HC" is in sale since Tuesday, March 16, 2010. This item is in the category "Books\Antiquarian & Collectible".