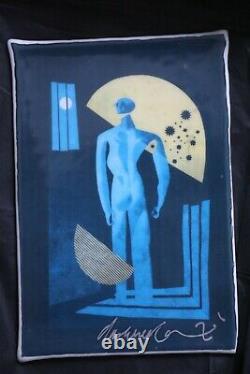 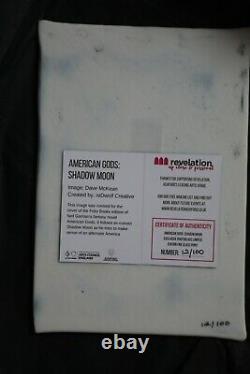 PLEASE NOTE - THIS IS NOT A BOOK, BUT A VERY RARE COLLECTABLE BASED ON NEIL GAIMAN'S "AMERICAN GODS". Presenting an exclusive Photo-glass Limited Edition (100) Fire-glazed print.

Issued unsigned, these are subsequently signed to the front in silver pen by the artist Dave McKean - only ten copies exist in a signed state. Each copy is also hand-numbered (on the back) out of 100. Size: 13.5 x 19.5 (approximate). Originally created by renowned illustrator and comic book artist Dave McKean for the cover of the Folio Society edition of Neil Gaimans fantasy novel'American Gods'. It follows ex-convict Shadow Moon as he tries to make sense of an alternate America.

This unique and stunning image resembling late 1800s tin types - precious and romantic, it wont fade with time. The Photoglass process involves converting a photographic image into a ceramic glaze that is fired onto a pure white glass base at 730 degrees Celsius. The process may result in slight variation in colour and texture. The item "Neil Gaiman American Gods limited edn photoglass print signed by Dave McKean" is in sale since Saturday, January 30, 2021.

This item is in the category "Books, Comics & Magazines\Antiquarian & Collectable". The seller is "stepsarg_qfkro" and is located in Barry. This item can be shipped worldwide.