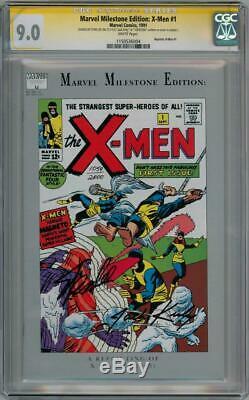 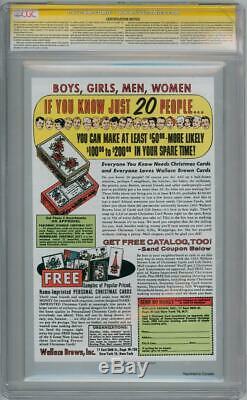 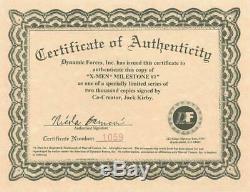 MARVEL MILESTONE X-MEN #1 CGC SIGNATURE SERIES SIGNED x2 STAN LEE JACK KIRBY COA. Marvel Milestone Edition X-Men #1 CGC 9.0 Signature Series Signed comic book from Marvel Comics, which is signed by Stan Lee, the late Marvel Comics Legend and co-creator of the X-Men back in 1963 with Jack Kirby! The comic was originally a Dynamic Forces Limited Edition signed by Jack Kirby and comes with the numbered Certificate Of Authenticity for his signature which matches the hand numbering on the front cover. Jack Kirby sadly passed away in 1994 before CGC Signature Series books existed, so this is the only way to get the authenticated signatures from the creators of the X-Men on the same comic!

It has been professionally graded by CGC, the largest independent comic grading company in the world, and slabbed in a sealed tamper proof protective case. The comic grade is guaranteed to be high grade 9.0 (VERY FINE/NEAR MINT) and this is a yellow label CGC signature series, which means that an authorised CGC representative witnessed the Stan Lee signing and this also acts as a Certificate Of Authenticity. You can check the validity of this item and the signature by entering the 10 digit code on the yellow label at the CGC web-site. There are no cracks on the case. We are also the largest dealer of Dynamic Forces signed comics outside of the US, with an extensive inventory of over 1,000 different issues!

To help you spot fakes. Get Supersized Images & Free Image Hosting. Create your brand with Auctiva's.