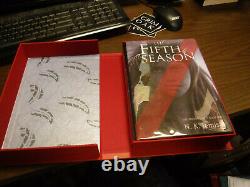 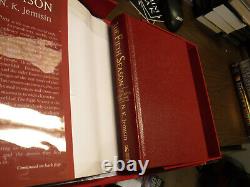 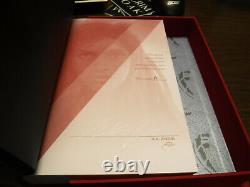 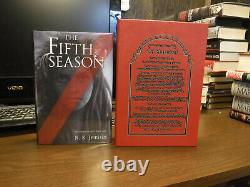 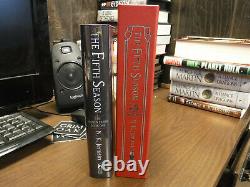 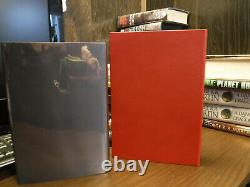 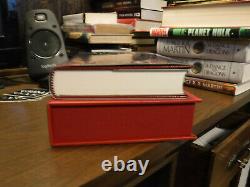 Signed and Lettered State (PC) Edition. Brand new and unread, Ships well padded and boxed with the collector in mind. This is not an actual letter, but an over run or Publishers Copy (PC).

Limited to 52 copies, so still very scarce. Leather bound and housed in a beautiful tray-case with the Stone Tablet engraved on front. Here's what the publisher had to say on this one.

Extraordinary worlds, extraordinary endings, witnessed by extraordinary characters. Jemisins The Fifth Season , the Hugo Award-winning, Nebula and World Fantasy Award-nominated tour de force of language, incident, and, most of all, of people.

Three women in three timesyouthful Damaya, skillful Syenite, and the older Essuneach face the challenges of the end times of their world. Their stories are inextricable, yet unique, limned in voices and tones specific and necessary to each character.

The world of The Fifth Season is the Broken Earth, a world clearly extrapolated from our own, but just as clearly and marvelously an invention of its author. The geographies and politics alike are contoured from the stuff of both life and imagination, combining into the rare fantastic setting that is as fascinating as the characters who inhabit it and the stories they find themselves in. Death and betrayal haunt the women who live in these pages. Apocalypses both world-spanning and personal try them, and if there are escapes to be forged, they will not be those a reader expects. This is the way world the ends in Jemisins unforgettable novel, with tumult, and revelation, and hope.

The seller is "glodowski125" and is located in Meridian, Idaho. This item can be shipped worldwide.