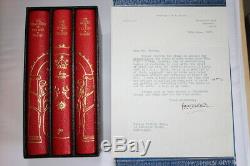 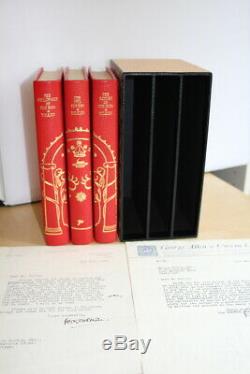 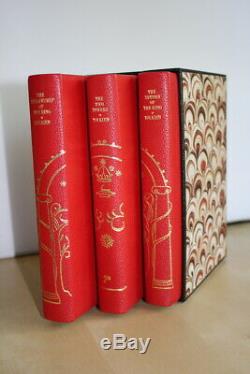 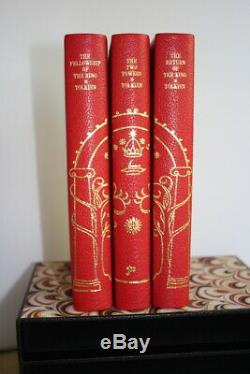 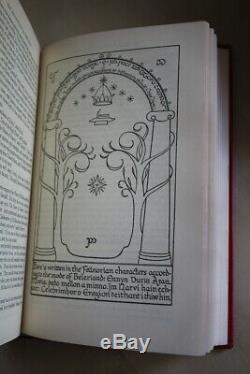 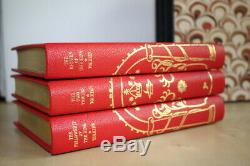 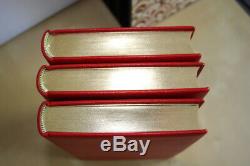 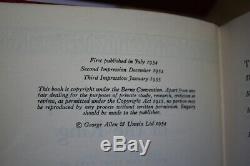 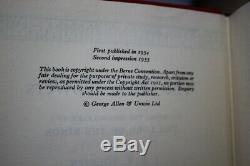 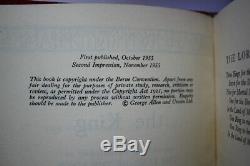 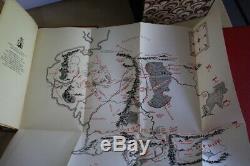 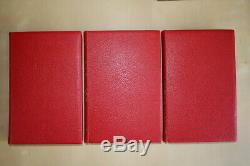 John Ronald Reuel Tolkien (1955) The Lord of the Rings , UK first edition set (3/2/2), published by George Allen & Unwin. Beautifully rebound in full red morocco (leather) incorporating Tolkiens own design on the spine, and housed in a custom made slipcase. In addition, an original typed and signed letter by JRR Tolkien discussing the publications delay of The Silmarillion; together with two more letters cementing its provenance. The Fellowship of the Ring , UK first edition, third printing , published in 1955.

All three volumes have been beautifully rebound in full red leather in honour of the original first edition red cloth bindings. Put together, the spines show the Gates of Moria as designed by Tolkien himself on page 319 of The Fellowship of the Ring. The page block edges have been gilded. The volumes are housed in a custom made slipcase with dividers for each individual book. The bottom of the slipcase is lined with soft felt so that the slipcase can slide in and out the shelf without causing noise and without damage to the slipcase.

Tolkiens letter to Martin Hooton , one page, 7 x 9 inch, personal letterhead, dated June 16, 1967, signed by hand. Nobody regrets the delay in issuing The Silmarillion and other related works more than I do. I have, however, had an overwhelming number of obstacles to cope with, the chief of which has been the trouble arising in early 1965 in U. I have already considered the idea that you mention of publishing some (of the) [inserted by Tolkien by hand] work in parts and getting out something before the whole is put in order. I will do my best.

Please give my best wishes to Elizabeth Goudge and thank her for her kind words. In near fine condition, with a diagonal crease to the lower blank area. Two central folds to fit an envelope. Ink of the signature unfaded, clear and unblemished.

Accompanied by a cc of the original letter from Hooton to Tolkien in which Hooton enquires about the progress on the Silmarillion, expresses his admiration, and mentions how Hooton introduced Tolkiens work to Elizabeth Goudge, a children books writer herself who won the Carnegie Medal for The Little White Horse in 1946. A referenced response letter to Hooton from the George Allen & Unwin publishing company, typed and signed by Rayner Unwin , Tolkiens publisher, and son of the publication house founder Sir Stanley Unwin. JRR Tolkien died at the age of 81 on September 2, 1973, some four years before The Silmarillion would eventually be published. Due to its unfinished nature, the complex work was edited and published posthumously by his son, Christopher Tolkien, with the assistance of Canadian fantasy writer Guy Gavriel Kay.

The Silmarillion is comprised of five parts and describes the universe of Eä, the homeworld of Valinor, Beleriand, Númenor, and Middle-earth, within which The Hobbit and The Lord of the Rings take place. In short, a gorgeous set of books accompanied with an interesting letter written and signed by Tolkien with excellent provenance. The item "JRR Tolkien, The Lord of the Rings, UK first editions with great signed letter" is in sale since Sunday, May 24, 2020.