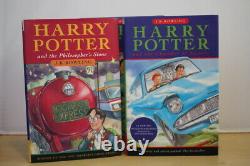 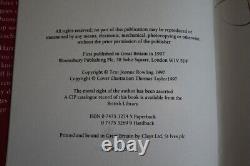 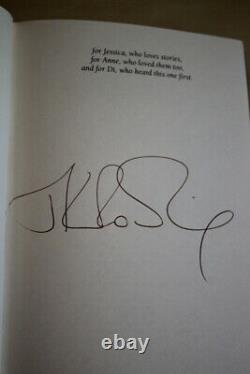 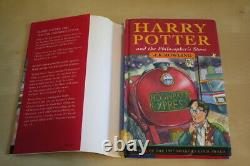 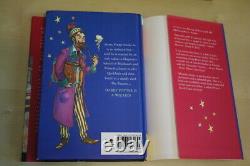 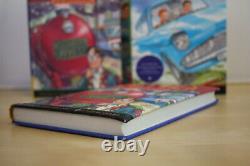 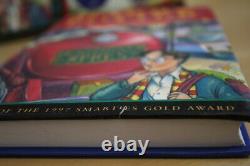 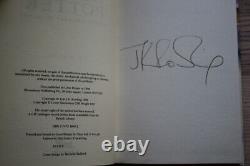 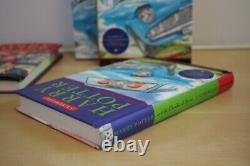 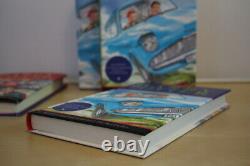 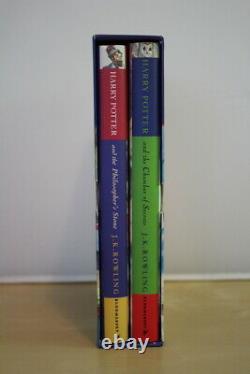 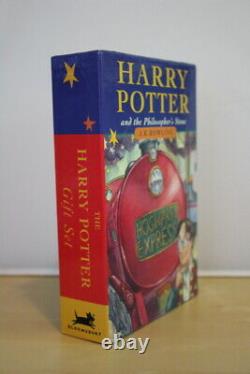 Joanne (Kathleen) Rowling , Harry Potter and the Philosophers Stone (1997), UK first edition, fourth printing , and Harry Potter and the Chamber of Secrets (1998), UK first edition, seventh printing. Both books published by Bloomsbury in the first issued first two volume box set. Both volumes are signed by author J. Rowling on the dedication page as shown. According to Philip Erringtons J. Rowling: A Bibliogarphy (2017), the first'Philosopher printing had a print run of only 500 copies; the second printing followed quickly with a run of 1,000 copies, followed by the third and fourth printing of 500 copies each only p.

Provenance : The signatures are consistant with how Rowling used to sign in 1998-99. The previous owner attended a Waterstones Nottingham signing in 1998. Condition : Philosopher is in very good condition. It bears no previous owners scribbles, no stamps, no bookplates, pages are clean. The boards corners are a little pushed and there is a bump on the front bottom edge as shown.

The dust jacket is NOT price clipped and a beautiful specimen, unfaded and showing the young wizard as called for. Chamber of Secrets is visibly unread in outstanding like new condition with no issues whatsoever. Notice the page block which is white like snow. The box is in near fine condition with just a hint of shelf wear.

This was the first box set that Bloomsbury published for the Harry Potter Saga. As more and more Potters were published until 2007 the publisher eager to capitalise on Potter-mania isuued a new box set containing the latest book together with the volumes that had already been published. A nice set at fair value and genuinely signed by Rowling. Due to the extremely high value of signed UK first hardback first printings editions of The Philosophers Stone, the early reprints have also become very collectable and valuable. The item "JK Rowling, Harry Potter and the Philosopher's Stone, UK signed first edition" is in sale since Wednesday, July 29, 2020.