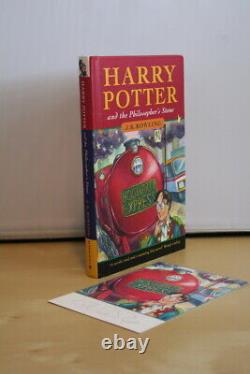 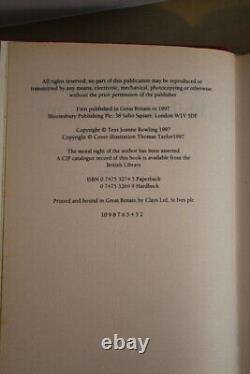 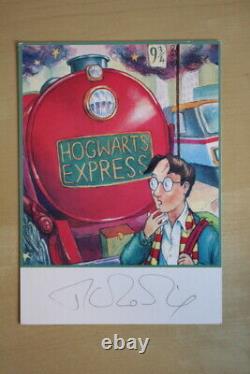 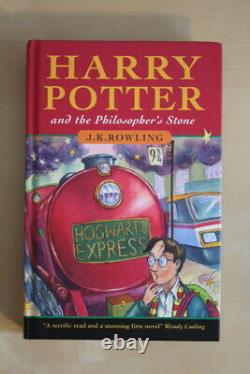 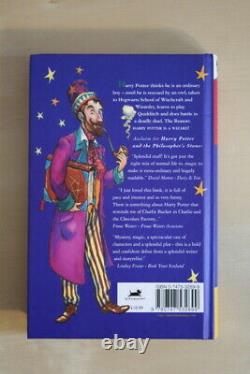 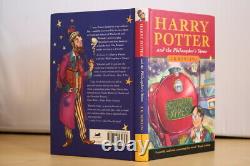 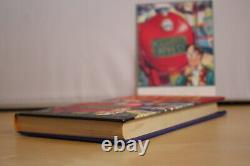 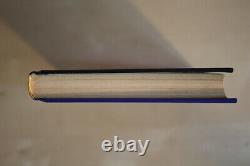 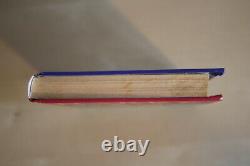 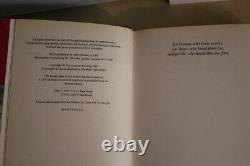 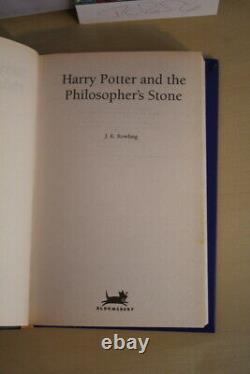 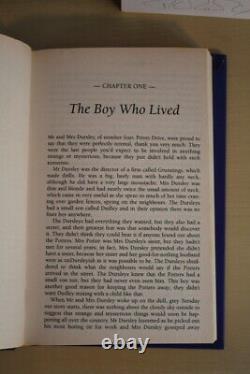 Joanne Kathleen Rowling (1997) Harry Potter and the Philosophers Stone , UK first edition, second impression , published in hardback by Bloomsbury. Together with a signed Hogwarts Express card with the same Thomas Taylor artwork as on the first edition front panel of the book. Following the first hardback printing of 500 copies of which some 300 went to public libraries, the second impression followed quickly with a run of 1,000 copies [Errington 2017: 4]. Just like with the hardback first print, the second print was issued without a dust jacket.

Condition : a beauitiful unrestored copy in near fine condition in the true sense of the wording. There are no previous owners scribbles inside, no names, no bookplates and no stamps.

The boards are square, tight with NO fading on the spine nor anywhere else. There is a laminate crease which is a slight production error and is not a condition issue. Slight toning to the page block commensurate with age including a few ageing spots as shown.

This is a natural ocurrance due to the cheap paper stock used at the time with a high paper acid content and only pronounces the authenticity of the book. Internally all pages are clean and free of any underlining, annotations etc. The page block was bound in slightly skewed (see image of the front pastedown). Again, this is a manufacturing inaccuracy and forms part of the history of the book. In short, a beautiful specimen hard to find in better condition.

Children books often suffer from corresponding treatment of their young readers, but this copy has survived the passage of time nicely. Harry Potter quickly became a global phenomenon and is as popular as ever among children and adults alike. In 1997, the first volume of the seven volume strong story arch was issued for the first time by Bloomsbury in the UK in hardback and simultanously in paperback. The hardback first edition was issued in 500 copies mostly intended for the public library market. As a consequence any hardback first edition in good condition which is not ex-libris commands a high price. Many collectors therefore resort to one of the 5,150 first impression paperback copies. However, the collecting world always prefers a hardback book not least because it is more durable.

This second impression was, according to Errington [2017: 4] issued in 1,000 copies and then followed by three reprints of further 500 copies. The second print had some textual errors corrected including the famous double wand error on page 53, and the missing o in Philosopher as well as the order of Witchcraft and Wizardry on the back panel. However, the blurb on the back panel is still essentially the same whereas from the third print onwards the blurb was much shortened. The second impression was also issued without a dust jacket. Rowling, Harry Potter and the Philosopher's Stone, UK first edition, signed" is in sale since Saturday, October 30, 2021.

This item is in the category "Books, Comics & Magazines\Antiquarian & Collectable". The seller is "firstandfine" and is located in Birmingham. This item can be shipped to all countries in Europe, all countries in continental Asia, United States, Canada. Rowling