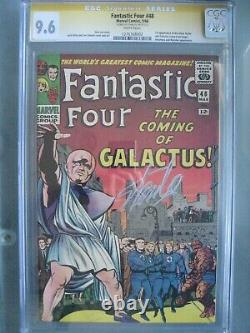 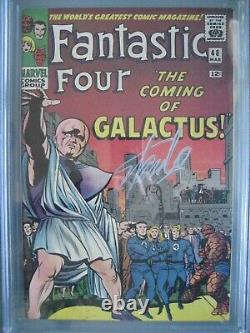 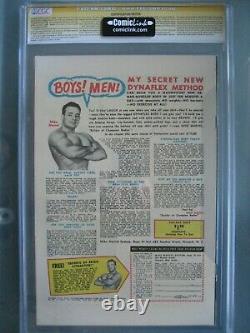 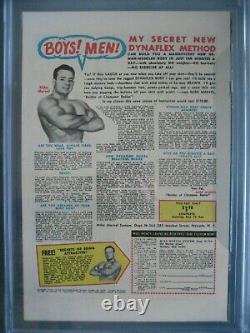 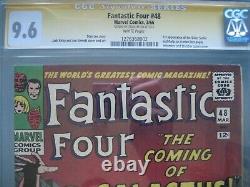 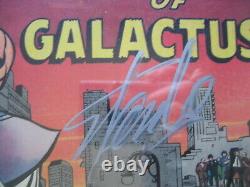 This CGC 9.6 NM+ stunner is one of just 7 Signature Series examples of this Silver Age key in grade and the second highest overall! High grade examples of this issue have never been in higher demand and the supply of CGC Stan Lee Signature Series 9.6s on the market is virtually non-existent. Adding to the desirability of this example, CGC notes that it retains newsstand-fresh White pages.

In 1966, the introduction of Galactus and the Silver Surfer in. #48 was a pivotal evolutionary step in the development of the Marvel Universe. Created by the legendary team of Jack Kirby and Stan Lee, comic book readers had never seen a story quite like this before. The "Galactus Trilogy" as it has come to be known, is and will always be "heralded" as one of the most important events in the history of comic books. The Silver Surfer and Galactus have been integral to countless subsequent story lines and remain extremely popular characters to this day.

There is speculation that a reintroduction of both Silver Surfer and Galactus within a post Disney acquisition, relaunched Fantastic Four movie franchise will be one of the few ways Marvel has to top Infinity War! There has always been huge demand for this issue, but this prospect will accelerate it. About Galactus and the Silver Surfer. The story goes that Stan gave Jack the rough idea for Galactus, a threat so vast that he must drain the energy of entire planets to survive.

When he received the pages back from Jack, he saw a smooth alien man on a flying surfboard. Jack explained that he thought a being of Galactus' stature would require a herald to help him identity planets for consumption. Surfing had become a popular sport among younger people in the mid-1960s, so it somehow made sense to give the herald a cosmic surfboard that could fly through space and they called the being the Silver Surfer. In the story that begins in. #48 and continues in #49 and #50, the Surfer rebels against Galactus to save the people of Earth and is punished by his master who puts up a barrier that takes away the Surfer's ability to fly through space, trapping him on the Earth.

The "Galactus Trilogy" is something almost all fans want to see translated into a high quality movie. The first attempt a decade ago, Fox's. Fantastic Four: Rise of the Silver Surfer. The offered example has been graded Near Mint+ 9.6 by CGC.

It has also retained newsstand-fresh White Pages, adding to its desirability. While the vibrations produced by the weapon proves ineffective against Inhumans, it has the potential to wreak havoc against normal human beings.

The ground of the Great Refuge trembles from the power of the weapon and everyone is thrown about. Maximus cackles with glee as he envisions the deaths of millions of helpless humans. For all of his mad genius, however, Maximus' plan fails. Aside from a few massive ground tremors, humanity is perfectly safe.

Gorgon and Karnak make a move to apprehend Maximus, but he darts past them and heads towards his Atmo-Gun. He reverses the polarity of the weapon, creating a null field of negative energy to slowly encapsulate the Great Refuge.

Reed knows that there is nothing they can do to counter the effects of a complete negative zone. Reed, Sue and Ben race to escape from the city, but Johnny wants to stay behind. He doesn't want to leave Crystal.

Crystal wants to remain with Johnny as well, but the rest of her family draw her back. Ben scoops Johnny up and manages to get outside of the null field barrier just as it completely seals the Great Refuge off from the rest of the world. Everyone feels Johnny's sorrow, and he is convinced that he will never see Crystal again. Meanwhile in the depths of outer space, a sleek, shining being known as the Silver Surfer streaks through the cosmos atop a metallic surfboard. While soaring through the Andromeda Galaxy, he draws the attention of the Skrulls.

The Skrulls know that wherever the Silver Surfer appears, his master, Galactus, cannot be far behind. Terrified, the Skrulls do everything they can to conceal their world from the Surfer's perceptions. In New York, the Fantastic Four arrive home to witness a most startling spectacle. The entire skyline appears as if it had caught on fire.

The Human Torch flies through the city canyons to get a closer look, but panicking New Yorkers begin to suspect that the Torch may actually be responsible for the strange phenomena. The FF return to the Baxter Building and Reed sequesters himself inside of his laboratory to analyze the situation.

The flames in the sky dissipate giving way to an unending field of space debris. The powerful being known as the Watcher appears inside of Reed's laboratory. He explains that he is responsible for the atmospheric disturbances, for he has been attempting to conceal Earth's existence from the attention of the Silver Surfer.

He further explains that the Surfer is the advance scout of Galactus, a powerful cosmic being that consumes the elemental energies of entire worlds, leaving them as little more than dried, lifeless husks. The Surfer meanwhile, investigates the debris field, and finds Earth hidden beneath it.

He flies to the roof of the Baxter Building and sends out a cosmic signal for Galactus. The FF race to the top of the building, and the Thing rams into the Surfer knocking him off the edge.

The Surfer is no longer a major concern however. This planet shall sustain me until it has been drained of all elemental life!

The item "Fantastic Four #48 CGC 9.6 WP SS Signed Stan Lee 1st app Silver Surfer" is in sale since Friday, September 3, 2021. This item is in the category "Collectibles\Comic Books & Memorabilia\Comics\Comics & Graphic Novels". The seller is "madeofmiracles925" and is located in Dublin, California.