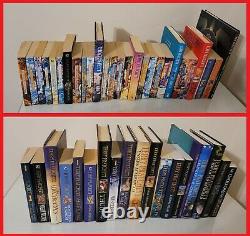 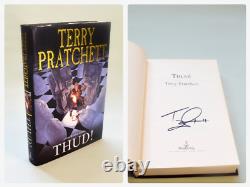 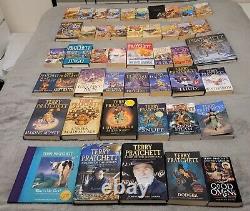 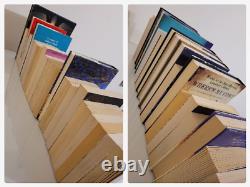 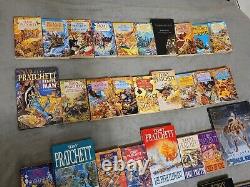 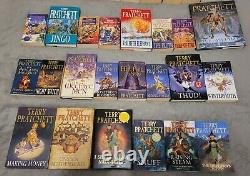 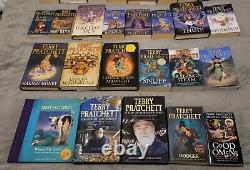 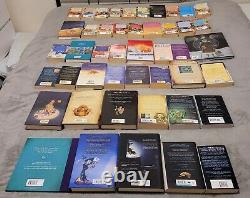 41 CORE BOOKS & 5 EXTRA BOOKS. SIGNED BY SIR TERRY PRATCHETT WITH NO DEDICATION MAKING IT THE PERFECT GIFT ALONG WITH THE OTHER BOOKS IN THIS SET. CORGI, GOLLANCZ & DOUBLE DAY EDITIONS. The Bundle includes the entire 41 books of the core Discworld series and also some sought after extras.

Including the rare large book Where's My Cow? " which is mentioned in "Thud! As Samuel Vimes reads it to his son. As well as his two famous short story books "A Blink of the Screen" and "A Slip of the Keyboard". As well as his well-known standalone novel "Dodger" and "Good Omens" the book which is co-wrote with Neil Gaiman which is now a popular TV show.

The majority of the books are in very good condition but a few of them are not due to their age and have marks etc so please bear that in mind. Also none of the books have names written in the front. See the pictures for more details and also the picture of the spines of the books. As you will see they are all complete and the hardback books all have their dust-jackets in tact. None of them are missing and have black covers with nothing on them.

Also the majority of the books are the old style Corgi editions, with cover art designed by Josh Kirby, which are now out of print and are rare. Discworld Core Set - Books in order. A Hat Full of Sky.

Extra Sir Terry Pratchett Books. A Blink of the Screen.

A Slip of the Keyboard. From a pet and smoke free home. The pictures are of the actual books and are not stock/fake pictures. This item is in the category "Books, Comics & Magazines\Books".