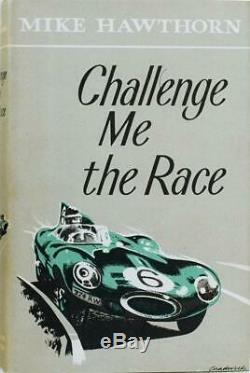 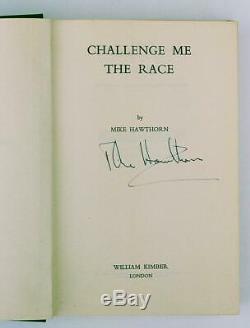 Challenge Me the Race' - Mike Hawthorn's autobiography First Edition. Published by William Kimber in 1958 and has been reprinted at least seven times with varying covers and prices. The cover here with the green 1955 Le Mans winning D-type No 6 is used on the first three prints - the first (this one) and second in July and the third in August 1958. This book is individually signed in ink by Mike Hawthorn and is part of my personal collection. Having seen and evaluated many such signatures, this signature carries my authenticity guarantee (there are forgeries around).

The first motor races I ever saw were at Brooklands. I was only a very small boy, but to me it was heaven to watch the cars thundering round those towering cliffs of concrete where the banking curved under the Members' Bridge, to wander along the lines of brightly coloured cars in their stalls in the paddock, to jump as an exhaust snarled suddenly and to sniff the aroma of castor oil. Mike Hawthorn - Challenge Me the Race. Brian Taylor who worked at Mike's Tourist Trophy Garage remembers:'I have many memories and bits and bobs including Michael's Challenge me the Race, obviously a first edition. Most of the people who worked there at the time were given one.

It has a Gillette sports parade photo he signed for me (and called me a bloody nuisance for asking,) which I stuck inside the front leaf. Mike misspelt my name on it, probably on purpose.

(note: that is not this copy of the book). The book's coverage runs from Mike's earliest years to the end of the 1957 season. Deals with his principal drives for Jaguar including the fateful race at Le Mans in 1955 at well as his time with Ferrari. There is the usual page-browning inside the front and back covers otherwise both the book and the dust wrapper are in exceptional condition. One of the best copies seen in a very long time.

The item "Challenge Me the Race Mike Hawthorn Signed by Mike Hawthorn 1st Edition" is in sale since Sunday, June 14, 2020. This item is in the category "Sports Memorabilia\Motor Sport Memorabilia\Formula 1\Books & Magazines". The seller is "jaglit" and is located in BRIGHTON.