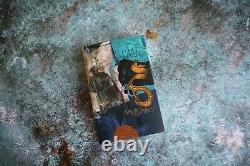 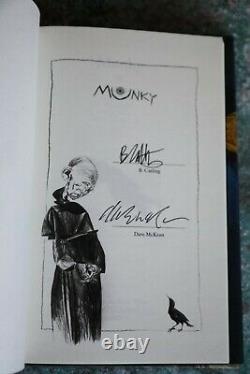 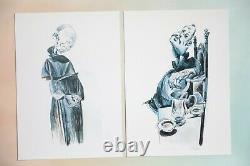 First edition, first printing in new and unread condition. Signed by the author and by the cover artist Dave McKean, accompanied by 2 limited edition postcards. There hadn't been monks at the abbey since 1600. Not living ones, that is.

When the puckish spirit of a monk begins haunting the storied village of Pulborough, known for its ancient abbey, Maud Garner, manager of the Coach and Horses Inn, arranges for the famous ghost hunter, Walter Prince, to come investigate. And from there, things spiral out of control. Peopled with richly drawn Dickensian grotesques and filled with bizarre and comical incident.

Is as compelling as it is antic. Catling transports the reader to an interwar England in the throes of change. Part bizarre ghost story, part whimsical farce, part idiosyncratic literary experiment, it could be described as P. Wodehouse collaborating with Raymond Roussel, with a dash of M.

James, if it weren't so uniquely its own thing. Catling, RA, was born in London in 1948.

He is a poet, sculptor, filmmaker, and performance artist, currently making egg-tempera paintings and writing novels. He has held solo exhibitions and performances in the United Kingdom, Spain, Japan, Iceland, Israel, Holland, Norway, Germany, Greenland, USA, and Australia. Have drawn much critical acclaim. He is also Emeritus Professor of Fine Art at the Ruskin School of Art, University of Oxford. "Brian Catling's peculiar genius for observation, and the testing and squeezing of location, always honours what Blake called "the Vegetated Mortal Eye's perverted & single vision.

It sometimes feels that the Eye has been removed and left overnight in a glass, such are the layers of spectral comedy swaggering into view. Life through the bottom of a deep pint jar. Is a delirious blend of terror and pantomime. The spine-chilling realisation, for those who have trespassed anywhere near this territory, where river licks at ecclesiastical land, is that it is all true. This item is in the category "Books, Comics & Magazines\Antiquarian & Collectable". The seller is "stepsarg_qfkro" and is located in this country: GB. This item can be shipped worldwide.