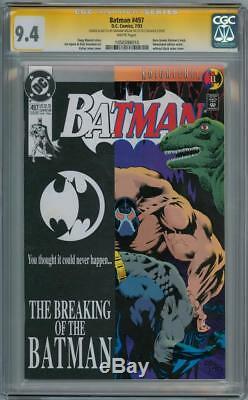 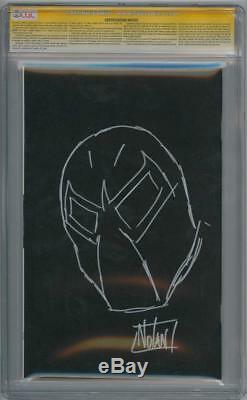 Which is signed by artist Graham Nolan, the co-creator of Bane, who has inked a full cover head sketch of Bane onto the back cover! This key issue features Bane breaking Batman's back... It has been professionally graded by CGC, the largest independent comic grading company in the world, and slabbed in a sealed protective case. The grade is guaranteed to be high grade 9.4 (NEAR MINT) and this is a yellow label CGC Signature Series, which means that an authorised CGC representative witnessed the signing and sketching and this also acts as a Certificate Of Authenticity.

As soon as the comic is signed, it is removed by a CGC authorised party and submitted straight to CGC for grading and encapsulation, guaranteeing the authenticity of the signature and sketch. You can check the validity of this item and the signature and sketch by entering the 10 digit number on the label at the CGC comics web-site. There are no cracks on the case. Any glare is just the scanner on the CGC case, which can cause reflection.

We are the largest dealer of CGC Signature Series and Dynamic Forces signed comics outside of the States, with an extensive inventory of over 1,000 different issues! Items are sent securely in strong packaging. For low quantities this is a stiff oversized corrugated cardboard comic mailer. For larger quantities of comics and higher value items we use bubble wrap & poly chips in boxes. CGC slabs are sent in multiple layers of protection in strong boxes.

We have over a decade's experience in comics & collectibles. To help you spot fakes. Get images that make Supersized seem small. Tailor your auctions with Auctiva's.