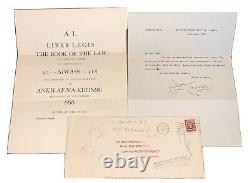 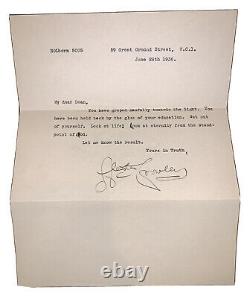 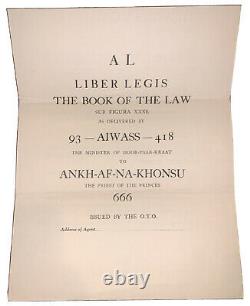 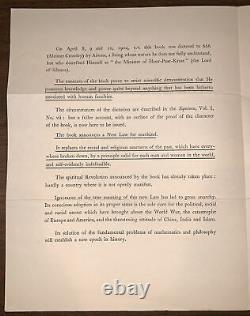 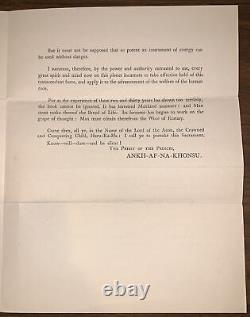 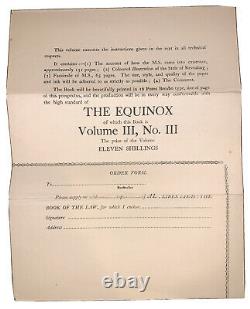 Also included is the original prospectus for The Equinox of the Gods and the envelope both were mailed in. The letter and prospectus were originally sent by Aleister Crowley to Reverend William Inge, D. The letter is typed but with a few holographic corrections and signed by Aleister Crowley with his "phallic A" signature. The Prospectus for The Equinox of the Gods consists of a single piece of paper folded once to create four pages with text on all sides.

Both the letter and the prospectus were folded twice horizontally and put into an envelope that is in Crowley's hand with his return address as A Crowley Esq / 59 Gt Ormond St / W C 1. The envelope was marked return to sender and sent back to Crowley.

The original mailing date as stamped on the envelope was June 25th, 1936. Some slight rubbing, wear, and minor discoloration, else in very good condition. If you have any questions feel free to ask and don't forget to check out my other listings. The item "ALEISTER CROWLEY SIGNED LETTER & EQUNIOX OF THE GODS PROSPECTUS, OCCULT, THELEMA" is in sale since Saturday, October 31, 2020.

This item is in the category "Books, Comics & Magazines\Antiquarian & Collectable". The seller is "dirkdensity" and is located in West Chester, Pennsylvania. This item can be shipped worldwide.