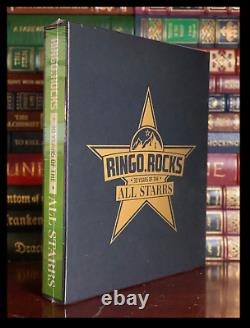 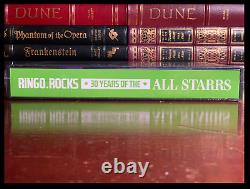 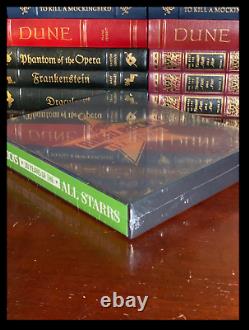 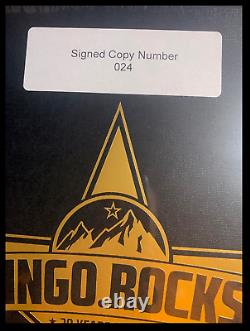 30 Years Of The All Starrs Signed Limited Edition. This is a new slipcased limited edition hardback of 30 Years Of The All Starrs signed by Ringo Starr. Of 500 made, this is # 24. Its been three decades since Ringo Starr founded his All Starr supergroup and took the stage with some of rock and rolls biggest luminaries, creating an exceptional legacy of performances of some of the greatest hits of all time culled from Starrs extraordinary catalog as a solo artist and as Beatle, as well as the All Starr Band members substantive songbook.

Also features is the world-renowned exhibition, Ringo: Peace & Love at the Grammy Museum in 2012; Starrs solo artist induction into the Rock and Roll Hall of Fame in 2015 by Paul McCartney, and more. Ringo Starr and the All Starr Band have recorded over 12 live albums beginning with their 1990 self-titled debut album at the Greek Theatre as well as their performances in Montreux, the Nippon Budokan in Tokyo, the live taping of VH-1 Storytellers in 1998, the King Biscuit Flower Hour taping in 2002, the PBS concert series Soundstage in 2007, and more. Starr is the author of Postcards from the Boys , Octopuss Garden , Photograph , Another Day In the Life. As well as two books featuring his artwork, Painting Is My Madness and Painting Is My Madness Too. The item "30 Years Of All Starrs SIGNED Beatles RINGO STARR New Hardback Limited #24/500" is in sale since Monday, May 3, 2021.