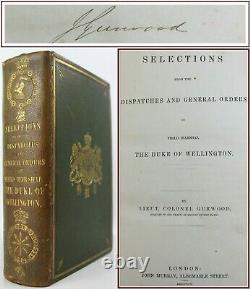 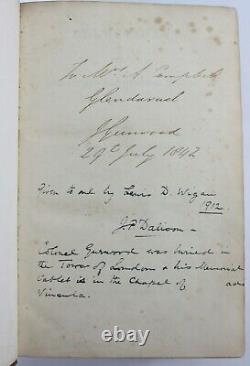 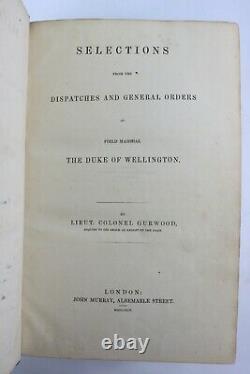 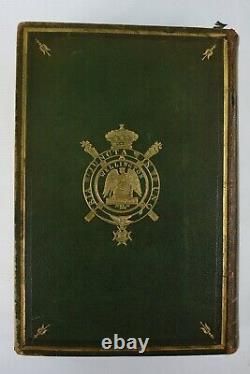 SELECTIONS FROM THE DISPATCHES AND GENERAL ORDERS OF FIELD MARSHAL THE DUKE OF WELLINGTON [DELUXE PRESENTATION COPY, SIGNED BY THE AUTHOR TO THE DAUGHTER OF WELLINGTON'S SURGEON]. 1st Edition, 8vo (23cm) xliv, 939pp (1) colophon. Author inscription to flyleaf: To Mrs A. 1847, the recipient, was the only child of John Robert Hume, physician to the Duke of Wellington and Physician Extraordinary to the King. From her early youth in London she was romantically linked with the Duke of Wellington's son, Lord Duoro, and it was well known in London society that they intended to marry. Lord Grey, the prime minister, referred to Lord Duoro in a letter as engaged to "the surgeons daughter" and the son wrote about the "lady who dressed better than anyone else in London". The Duke seems to have gently put a stop to the marriage and Hume's daughter Elizabeth subsequently married Archibald Campbell of Glendaruel.

There is a much later inscription to the flyleaf, dated 1912 concerning Gurwood's burial in the Tower of London, with the inscription of J. John Pelham ('Jack') Dalison, Queen's own Royal West Kent Regiment, who had received the book from his father-in-law. Some wear and rubbing to the leather. Area of wear to the tail of the spine.

A small area of damage to the rear joint, but binding holding together well. Foxing to first and last few leaves, but generally very clean throughout. A good copy with interesting Scottish provenance, signed by the author. The recipient's grave marker is still visible at St. Sophia's Chapel in Glendaruel, Argyll. This item is in the category "Books, Comics & Magazines\Antiquarian & Collectable". The seller is "gilleasbuig*ferguson*rare*books" and is located in this country: GB. This item can be shipped worldwide.